Is the abrupt end to the RE/MAX-Redfin Partnership foreshadowing some major changes and conflicts that will be affecting the real estate industry? Realtors need to stay up to date with technology. They have to educate themselves with marketing. They need to get AHEAD of changes in the industry. It’s the only way to ensure they solidify their presence in the future of real estate.

The RE/MAX and Redfin Partnership

A few months ago, RE-MAX and Redfin entered into a 2-year lead-referral partnership, but the agreement has already been called off. The purpose of the relationship was for RE/MAX to benefit from Redfin’s digital presence.  Redfin would benefit from RE/MAX’s large network of realtors across the U.S. and Canada. In addition, Redfin would take a commission of 25% for any referrals instead of the normal 30% rate. 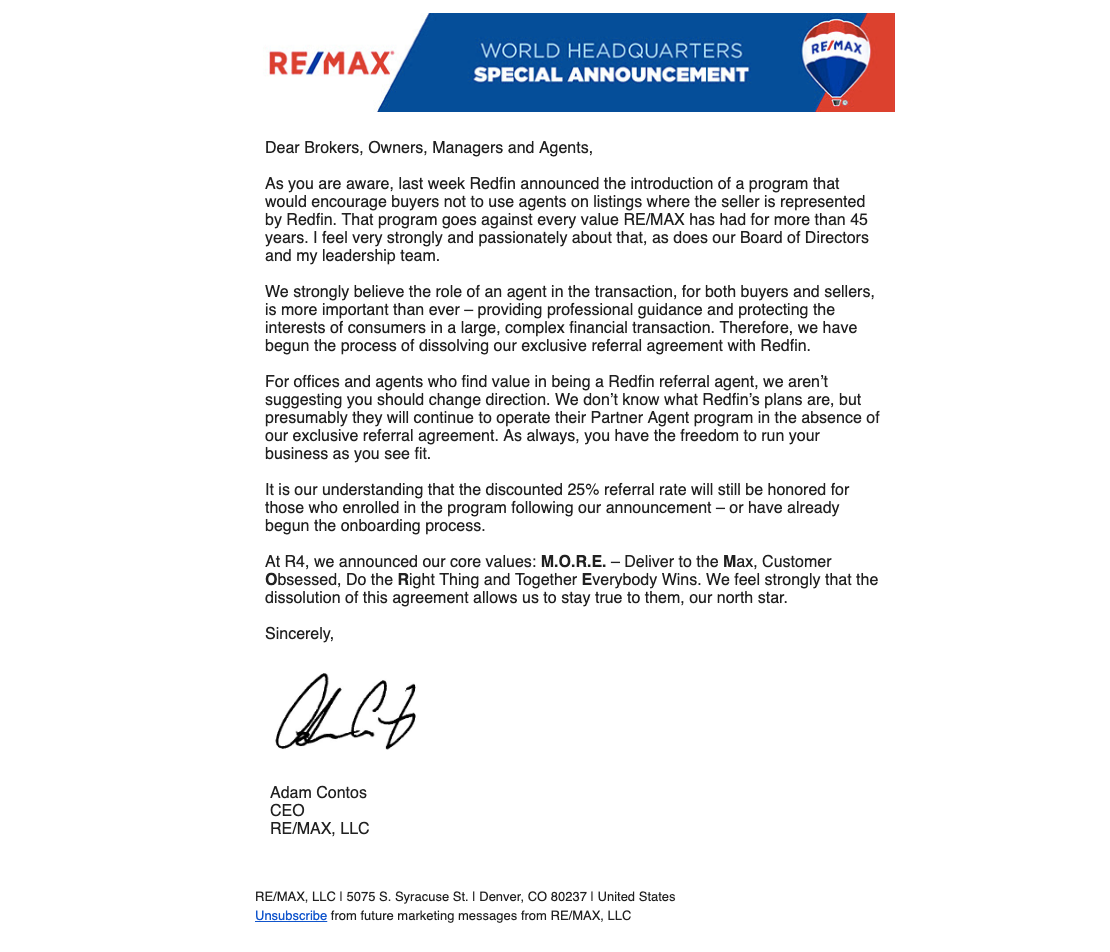 The intent was to create synergies in new markets, but competition would continue where both companies had an existing presence. RE-MAX felt that because Redfin relies on technology for most of its business and the number of listed agents they have is quite small, this overlap would not be a large enough issue to overshadow the benefits of the partnership.

Things changed. Redfin announced that it would be launching a pilot program called Redfin Direct. The goal would be to cut out realtors from the entire buying process. Essentially, this pilot program would allow buyers to make offers on homes directly, without the use of a licensed agent.

RE-MAX CEO Adam Contos stated that this program “goes against every value that RE/MAX has had for more than 45 years,” and his statement was echoed by the firm’s board of directors and leadership team. RE/MAX is a brokerage that focuses on the realtor-buyer relationship. Cutting those individuals out would be devastating to their business model.

So why would Redfin enter into this partnership and then release a new program? Just 2 months in? That would pose a serious threat to RE/MAX? While nothing has been officially released, there is speculation that Redfin leveraged the partnership to access data from RE/MAX. The data fine-tuned the algorithm that runs Redfin direct.

Zillow’s CEO Spencer Rascoff noted that Redfin has publicly stated that “they aim to acquire more listings inventory in given markets.” Since only licensed agents or a brokerage with a physical presence in an area can access the local MLS listings, it is possible that Redfin took advantage or RE/MAX’s wide-spread network to gain access to this data and incorporate it into their new system.

What does this mean for Realtors?

The termination of this partnership has huge implications for the real estate industry. The real estate market accounts for 13% of the U.S. GDP and is cumulatively valued at over $31.8 trillion – this is a huge market that everyone wants a piece of.

In fact, venture capital funding for real estate technology is quickly becoming a start-up category of its own. In 2018 Softbank launched a $100 billion venture capital fund with the goal being to solve technological challenges. While this money went into many industries, the largest portion actually went to fund start-ups that set out to revolutionize real estate.

Real estate technology, or proptech as the venture capitalists call it, is continuing to draw huge investments from large banks like Goldman Sachs. This is a major indication that this technology is here to stay. More companies like Redfin will continue to pop up and disrupt the traditional real estate industry.

Even Zillow’s CEO spoke out in regards to Redfin’s announcement! Warning that companies like them are a threat to the traditional real estate industry and that large brokerages should be concerned with their continued growth.

New companies like Redfin and the associated technology that comes with them seek to make a homebuyer’s realtor obsolete, and realtors need to be aware of this threat. By focusing on improving marketing and technological integration to their existing methods, they can prepare for what’s coming and stay relevant in the industry. If RE/MAX had been prepared, perhaps they would have seen this coming. They would have had a chance to protect their data and agents.