The Fyre festival was a huge flop – that’s an understatement. But I do applaud people for having the vision and attempting such an epic party!

Back in the day when I used to blog for a ticketing company, we discussed the risks and tribulations of holding a music event on a secluded island posed. This was before we knew the magnitude of what was to come.

After the documentary came out, a few more revelations occurred to us regarding marketing. Here they are, in no particular order:

Here is an infographic we borrowed from Mashable

By now, almost everyone is familiar with the Fyre Festival – a marketing and organizational disaster. The festival left thousands of festival-goers out-of-pocket. Stranded. Amid a post-apocalyptic scenes of devastation, as well as millions in unpaid bills. Fewer people may be aware of the roll of influencer marketing in creating the disaster in the first place.

Influencer marketing is a big business, with predictions that it could be a $10 billion market by 2020. Just as telling is that according to a 2017 report by social analytics company Sharablee, more than one-third of millennials trust what an influencer says about a brand more than what the brand says about itself. Concerns about the role of influencers have prompted the Federal Trade Commission (FTC) to issue guidelines for influencer marketing. These include rules that influencers must disclose their relationship to the brands they are paid to push, and that this must be done in a way that makes it clear there is a financial connection is between the brand and the blogger.

Influencers played a big role in creating the initial hype around the Fyre Festival. Months before the festival, organizers Ja Rule and Billy McFarland paid a litany of influencers, who they dubbed “Fyre Starters” to hype the festival on platforms like Instagram. Between them, these influencers commanded millions of followers. A group of supermodels, including Bella Hadid and Hailey Baldwin, were flown out to the Bahamas for a weekend photoshoot, and were paid to use images from the shoot to promote the festival on social media, along with posts like: Fyrefestival.com join me in April so excited #fyrefestival. 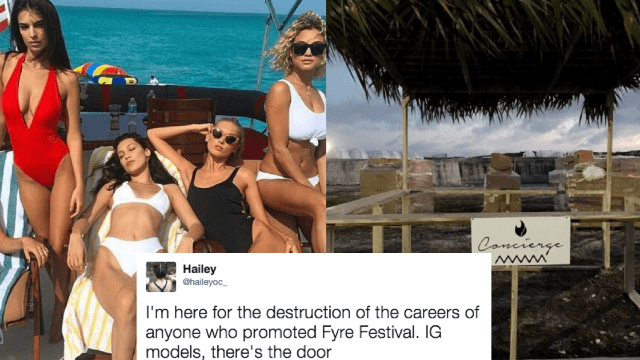 The images and posts implied that the festival would resemble the shoot. Suggesting models and celebrities would be in attendance. Idyllic beaches would be the scene. And last but not least, hot bands would perform. Although the influencers’ posts implied they would be attending the festival, none of them actually showed up.

Now, the festival-goers who did show up.

The landed to find out that the bands had cancelled. The luxury accommodation consisted of bare mattresses in recycled FEMA tents. Some of which were soaking wet.  And the fine catering promised to them was cheese sandwiches. Festival goers are filing lawsuits against the organizers.

They include a class-action complaint that seeks $100 million in damages. 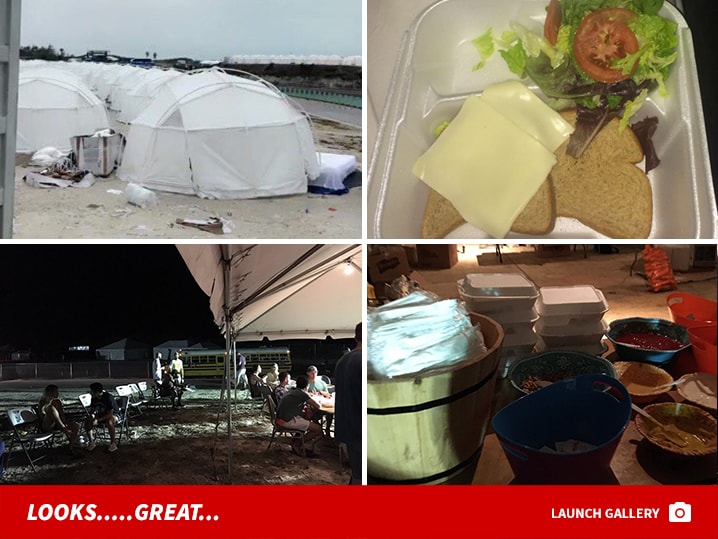 More interesting, however, is the suit filed in California state court.  The Suit names the social media influencers who promoted the festival, as well as the organizers. The influencers are being sued for fraud. Breach of contract for failing to “provide the festival experience as promised,”. And for “misrepresentations” that caused people to purchase tickets. The suit refers to 100 unnamed “Jane Doe” influencers and claims that, “Without the widespread and uniform dissemination of the false promise,” by these influencers, people would not have purchased tickets to the festival.

With the legal fallout from the Fyre Festival still ongoing, and increasing scrutiny into the role of influencers from both the FTC and the FBI, what’s next for influencer marketing? The press coverage from Fyre may have made consumers much more suspicious of influencer promotions. In the future, brands and influencers will need to win back consumers’ trust.

This may mean that brands will need to pay more attention to whether the influencers they hire are following FTC guidelines. In fact, just weeks before the Fyre Festival, the FTC sent letters to over 90 Instagram influencers to, “clearly and conspicuously disclose their relationships to brands.” Yet almost none of the influencers involved in the debacle met this standard. In fact, model and actor Emily Ratajkowski was one of the only Fyre Starters to label her post as an “#ad”.

By unwittingly taking part in a marketing train wreck, those who promoted the Fyre Festival have cast a shadow of doubt for influence marketing as a practice, affecting the way that brand sponsorship operates in the future. In the future, influencers may well be held as accountable as brands themselves.